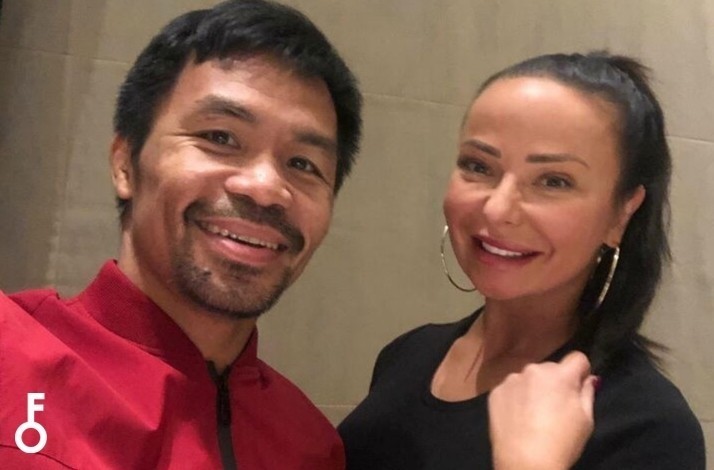 The winner of the #PacManFightNight Sweepstakes, Erin L., is easily in the running for one of Pacquiao’s biggest fans! She found out about the sweepstakes on Facebook and simply entered on a whim. To her surprise and delight, SHE ACTUALLY WON! With only a few days’ notice, Erin and a friend hopped on a plane all the way from Australia to meet up with Pacquiao and his team in Vegas! Talk about some dedicated fans!

After we flew Erin and a friend into Vegas, they watched Pacquiao’s final training sessions before the fight, joined his team for a special dinner, experienced the weigh-in with exclusive tickets, grabbed photos with the boxing legend himself, AND watched the legendary Pacquiao vs. Thurman fight with VIP seats and locker room passes! Talk about a once-in-a-lifetime experience! The best part? Pacquiao came out VICTORIOUS!

We were so excited to chat with Erin about her time with Manny in Vegas, and we loved hearing about the amazing memories she made! We had to know if the sixteen-hour flight was worth the trip! She quickly informed us that, “Yes, it was a long way to come from Australia, but so worth it to meet Manny and experience watching him fight, and win! Just incredible!”

When we asked her about the moment when she finally met Manny, she told us that she, “...felt like the luckiest person in the world meeting Manny, I was so nervous and felt a bit tongue-tied trying to talk to him. It was so good to have some selfies with him to reflect on forever!” To be honest, we think we would have been just as starstruck to meet this boxing legend, especially after the anticipation of a sixteen-hour flight!

At the closing of our conversation with Erin, we were touched by the kind words she had to share about Pacquiao’s character and her experience as a whole; “I’ll be forever grateful for being a part of the IfOnly experience. Manny is so humble and gives back so much back and is raising so much awareness through his foundation. In a world so focused on ego and consumerism, more celebrities should I be using their voice and money to create a change.”

Here at IfOnly, we feel SO lucky to be able to not only create such amazing experiences and memories for others to cherish, but also, to support such deserving causes like the Manny Pacquiao Foundation!

On Saturday night, July 20th in Las Vegas at the MGM Grand, Pacquiao defeated Keith Thurman in a tight battle by split decision to become the unified WBA Super World Welterweight champion. The judges scored the fight 115-112x2 and 113-114, an incredibly close score.

The excitement started at the Weigh-In, where younger Thurman had a lot to say about taking Pacquiao down, claiming it was time for him to retire. Pacquiao, on the other hand, was very focused on the fight, saying he was the best prepared he’s ever been and had a great training camp and that he was feeling very ready for the next day.

"I'm not the kind of boxer to be a talker, just promoting the fight," Pacquiao said. "I think we did a lot of things [to promote the fight]. He did his best, and I did my best to make the people happy."

In interviews leading up to the fight, Thurman talked about being prepared for Pacquiao's lunging style, but after a major knockdown about halfway through the fight, he never seemed to beat the Filipino legend's hallmark timing. In the 10th round, Pacquiao badly hurt Thurman with a left hook to the body, and while he didn't go down, One-Time retreated to collect himself and removed his mouthpiece to catch his breath.

That left hook to the body made all the difference. Even though Thurman was rallying and breaking down the big lead Pacquiao had built early in the fight, the body shot stopped him in his tracks and broke the momentum. Thurman would struggle for the rest of the fight to land the high-scoring shots.

The world is again Pacquiao's oyster after this win. Many people concerned about the age difference and Pacquiao's previous performance, didn't pick him to win this fight. However, at 40 years old, he not only proved that he can still compete with the best welterweights in the world, but he also showed power that many thought he had left behind in the earlier years of his career.

Even if you missed the fight, you can still support the Pacquiao Foundation and add to your boxing memorabilia collection by visiting our site.

Stay tuned for more sweepstakes and dream opportunities with IfOnly. It’s time to make your life an event!